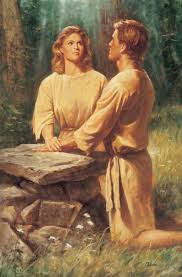 Artistic rendering of Adam and Eve
Responsum of the Congregation for the Doctrine of the Faith to a dubium
regarding the blessing of the unions of persons of the same sex
March 15, 2021
TO THE QUESTION PROPOSED:
Does the Church have the power to give the blessing to unions of persons of the same sex?
RESPONSE:
Negative.
Go here to read the concise and articulate Explanatory Note

Article of Commentary on the Responsum ad dubium, 15.03.2021
The new statement of the Congregation for the Doctrine of the Faith is a response to a question – in classical terms, to a dubium – occasioned, as is normally the case, by pastors and faithful who require clarification and guidance concerning a controversial issue. When questions are triggered by problematic assertions or practices in important areas of Christian life, an affirmative or negative response is provided, along with a statement of the reasoning that supports the response presented. The purpose of such interventions is to help the universal Church to respond better to the demands of the Gospel, to settle disputes, and to foster healthy communion among the holy people of God.
In the present case, a disputed question has arisen in the framework of the “sincere desire to welcome and accompany homosexual persons, to whom are proposed paths of growth in faith” (Explanatory Note), as indicated by the Holy Father Pope Francis at the conclusion of two Synodal Assemblies on the family: “so that those who manifest a homosexual orientation can receive the assistance they need to understand and fully carry out God’s will in their lives” (Apostolic Exhortation Amoris laetitia, n. 250). These words are an invitation to evaluate, with appropriate discernment, projects and pastoral proposals directed to this end. Among these are blessings given to the unions of persons of the same sex. It is therefore asked whether the Church has the power to impart her blessing: this is the formula contained in the quaesitum.
The answer - the Responsum ad dubium – is explained and motivated in the attached Explanatory Note of the Congregation for the Doctrine of the Faith, dated February 22, 2021, to the publication of which Pope Francis himself has given his assent.
The Note is centered on the fundamental and decisive distinction between persons and the union. This is so that the negative judgment on the blessing of unions of persons of the same sex does not imply a judgment on persons.
Go here to read the brief Commentary on the Responsum ad dubium

CONGREGATION FOR THE DOCTRINE OF THE FAITH
CONSIDERATIONS REGARDING PROPOSALS
TO GIVE LEGAL RECOGNITION
TO UNIONS
BETWEEN HOMOSEXUAL PERSONS
June 3, 2003
INTRODUCTION
1. In recent years, various questions relating to homosexuality have been addressed with some frequency by Pope John Paul II and by the relevant Dicasteries of the Holy See.(1) Homosexuality is a troubling moral and social phenomenon, even in those countries where it does not present significant legal issues. It gives rise to greater concern in those countries that have granted or intend to grant – legal recognition to homosexual unions, which may include the possibility of adopting children. The present Considerations do not contain new doctrinal elements; they seek rather to reiterate the essential points on this question and provide arguments drawn from reason which could be used by Bishops in preparing more specific interventions, appropriate to the different situations throughout the world, aimed at protecting and promoting the dignity of marriage, the foundation of the family, and the stability of society, of which this institution is a constitutive element. The present Considerations are also intended to give direction to Catholic politicians by indicating the approaches to proposed legislation in this area which would be consistent with Christian conscience.(2) Since this question relates to the natural moral law, the arguments that follow are addressed not only to those who believe in Christ, but to all persons committed to promoting and defending the common good of society.
... text continues...
Go here to read the complete text of these Considerations
----------------------------------------------------------------
My purpose in these posts is to help spread the contributions of a variety of Christian and other writers in a desire to share significant writings that in my estimation contribute to the common good and directly or indirectly give glory to God and extend the Lord's work of salvation to all of humanity. G.S.
----------------------------------------------------------------