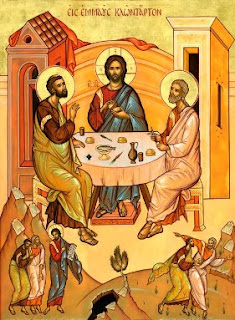 I received a wonderful grace on retreat this past week at Villa Chateauneuf - Foyers de Charité in Sutton, Québec's Eastern Townships region, where Père Jacques Beaudry c.s.v. gave what the Foyers call "Retraite Fondamentale" all about the sheer magnitude of God's love and the intimate life of spiritual marriage the Son of God initiated with humanity in his Incarnation.

Like many people I had always understood Jesus' reference to the gates of hell when He established Simon as Peter, the rock on which He would build his Church, as meaning that we the Church are under constant attacks from hell and that their very gates are upon us but that those gates would not prevail against the Church.

The Lord gave me finally to understand that, no, it is God himself who is on the offensive against hell and its gates, most potently at the very moment of the Incarnation, and then or course on Calvary, which are Jesus' "1 - 2 punch" against the devil and his rebellious demons.

Our very existence as baptized and confirmed disciples is an offensive against hell; as is our every thought, prayer, word, decision, and action on behalf of faith, hope, love, justice, and mercy for the glory of God. We are part of the army of the Lord of Hosts and the Bride of Christ who follows her Lord in his offensive against the gates of hell, and they shall not prevail against Him!

That is a wonderful answer to share with those who feel under siege by the "minions of hell" with their sexual liberation agendas and lobbies.... This is also very motivating for us to go on accepting to endure the "purifying fire" of rendering our Church more transparent and responsible and bent on the protection of the innocent and the reform of the guilty in the current environment in which human society - after thousands of years of taboo and silence - is finally addressing the issues of sexual and other forms of abuse.

Once again, in a strange and unexpected way, the Church of Jesus Christ is manifest as his "sacrament of salvation" for humanity. We need to keep in mind that before the sex abuse scandals erupted in the Church, sexual and other forms of abuse were heavily taboo in most societies. It was impossible to talk about such things and obtain a fair hearing. First, people were uncomfortable believing allegations about persons they knew, especially familiar persons like close relatives and adults with responsibility over their children.

As we are learning, the vast majority of sexual and other forms of abuse happens in the family, which is the basic "cell" of human society and the first place where children are formed and learn to become "civilized". It is therefore inescapable that whenever there is abuse, it is likely to happen within the family, where distortions of character in the adults are unavoidably cause for suffering in everyone in the family, especially those who are most vulnerable like children, youth, the aged, and the sick and disabled.

God has obviously used his Church, Jesus has used his Bride, like a scalpel to "lance" this terrible boil on the body of the human family. This terrible infection of abuse can now finally be addressed and we are already learning much more than we have ever understood about the human process of maturation and how it happens that there are interruptions of development which distort people with disastrous results like abuse of others around them.

It is becoming known that those who abuse others are almost always troubled souls suffering deep wounds and distortions of personality and character, and when they misbehave and abuse others, it is out of the overflowing of their own misery and suffering. They are sadly passing on the harm that was done to them.

The only way to stop the terrible cycle is the strategy that Jesus introduced. People who behave horribly, for the most part, have never experienced true life-giving love. Their human deficit is in effect a deficiency of development, like a big hole in the ground waiting for a house to be built there. Digging the hole deeper won't show any sign of the house to come, but only actual building materials.

Love is the primary building material composing the human person, and Jesus, being the Son of God, understood that. Our chief challenge is moving beyond the "fortress" attitude of defending ourselves in the jungle attitude of the "survival of the fittest" which is a primary motivator in human affairs, from the economy to culture, and our health, social, and justice systems.

Jesus demonstrated, however, that to commit to practicing universal love is very costly. Those who are motivated by different motives are likely to perceive the "universal lover" as a threat to be eliminated - which is how they dealt with Jesus - or an enemy to be subdued or perverted to adopt their own violent and self-serving ways. Anyone who wants to follow Jesus needs the strength He had from his Father's love and the Holy Spirit in order to remain faithful to the call of universal love to the end.

Matthew reports in chapter 5 verse 43 and following: "You have heard that it was said, 'You shall love your neighbor and hate your enemy.' 44 But I say to you, Love your enemies and pray for those who persecute you, 45 so that you may be children of your Father in heaven; for he makes his sun rise on the evil and on the good, and sends rain on the righteous and on the unrighteous. 46 For if you love those who love you, what reward do you have? Do not even the tax collectors do the same? 47 And if you greet only your brothers and sisters, what more are you doing than others? Do not even the Gentiles do the same? 48 Be perfect, therefore, as your heavenly Father is perfect."

Luke reports an even stronger teaching and warning by Jesus to anyone who would listen in Luke chapter 6 verse 27 and following:

27 "But I say to you that listen, Love your enemies, do good to those who hate you, 28 bless those who curse you, pray for those who abuse you. 29 If anyone strikes you on the cheek, offer the other also; and from anyone who takes away your coat do not withhold even your shirt. 30 Give to everyone who begs from you; and if anyone takes away your goods, do not ask for them again. 31 Do to others as you would have them do to you.

39 He also told them a parable: "Can a blind person guide a blind person? Will not both fall into a pit? 40 A disciple is not above the teacher, but everyone who is fully qualified will be like the teacher. 41 Why do you see the speck in your neighbor's eye, but do not notice the log in your own eye? 42 Or how can you say to your neighbor, 'Friend, let me take out the speck in your eye,' when you yourself do not see the log in your own eye? You hypocrite, first take the log out of your own eye, and then you will see clearly to take the speck out of your neighbor's eye.

43 "No good tree bears bad fruit, nor again does a bad tree bear good fruit; 44 for each tree is known by its own fruit. Figs are not gathered from thorns, nor are grapes picked from a bramble bush. 45 The good person out of the good treasure of the heart produces good, and the evil person out of evil treasure produces evil; for it is out of the abundance of the heart that the mouth speaks.

46 "Why do you call me 'Lord, Lord,' and do not do what I tell you? 47 I will show you what someone is like who comes to me, hears my words, and acts on them. 48 That one is like a man building a house, who dug deeply and laid the foundation on rock; when a flood arose, the river burst against that house but could not shake it, because it had been well built. 49 But the one who hears and does not act is like a man who built a house on the ground without a foundation. When the river burst against it, immediately it fell, and great was the ruin of that house."

Peace to you, dear reader, and to your family, friends, colleagues, and neighbors... the Peace that Jesus offers but which the world can never give or truly understand. It is a peace that comes from God the Creator's confidence in his design and plan for humanity and in his confidence in our ability and willingness to accept his love, to follow his guidance, and to choose wisely.