The Nativity Story film - refreshing our view of the mystery of Jesus' birth to a real human couple. 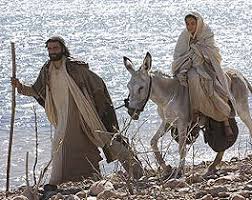 This film is a remarkable attempt to portray in a fresh way the great mystery of the Son of God coming to Earth as the infant of a virgin betrothed to a young man before they had come to live together. The sheer human drama of it has been found in every generation to be a gripping story that inspires the simplest and most sophisticated people alike.
At Christmas we seem to catch a glimpse of what humanity could be all the time if we only came to accept one another as children of the same God and as brothers and sisters to each other. When you first see the film, you may find some of your sensitivities shocked or surprised, because we become familiar with certain tellings of the Nativity Story and certain renderings of the details. It is like that with any element of our faith when in each generation it is reformulated so that it can be put in words more likely to convey to a new generation, for whom the usage of the language has changed, the full truth and wonder of the original events and divine revelation.
Check out the Catechism of the Catholic Church and what it says about the birth of Jesus. I seem to recall that our Church teaches that Mary remained a virgin before, during and after the birth of Jesus, but that does not necessarily mean she was spared birth pains altogether. She who shared in Jesus' passion would most appropriately share in what women have inherited from Eve, so that as Jesus took on himself our sins; so his Blessed Mother took on herself what is proper to women, but in a way that restored, by the grace of God, what the Creator originally intended for women to be and experience in cooperating with Him for the creation and transmission of life.
In reviewing this film and discussing anything related to our faith with people of our day, I think we would want to avoid approaching people with wholesale rejections of anything in the culture that is not a faithful and exact expression, interpretation, or quotation of our Church's teachings. It takes nothing away from our faith for us to appreciate the value of such a film on its own merits and to see how it can be helpful in our ongoing quest to understand the mysteries of divine revelation and of our salvation. I was attentive to the teachings of our faith while viewing the film and found nothing that manipulated or contradicted the Gospels.
The film is the best rendering I've ever seen of what it would have been like for Mary and Joseph to go about their business in Nazareth once word got out that she was pregnant, and word must certainly have gotten out once she returned from Elizabeth's after four months or so. In fact, I found the film quite edifying in showing Mary and Joseph as quite human, though she is without sin. She is never portrayed as sinning, even though she is shown as experiencing a wide range of emotional states as she lives through the amazing events within her and around her. I don't think it is an insult to our faith and Catholic dogma to say that Mary would have experienced some childbirth pains.
In the Book of Genesis, the Lord told Eve that her pains in giving birth would be intensified; so even the way God created the sinless first man and woman, there would have been some birth pains, which is only logical in considering that a baby must pass through the birth canal. Original sin intensified those pangs. Mary's sinlessness would have spared her the intensification and acknowledging the possibility that she may have endured some pangs makes it possible for her to be presented to people today as a real person and not as one who wasn't really or entirely human but almost angelic.
John tells us that Jesus was human like us in all things but sin, so why should his blessed Mother be any different from Him, the sinless One? Devout or inspired renderings of the nativity such as by Maria Val Torta or some saints suggest that Mary was taken up in a sort of ecstasy at the time she gave birth to Jesus, which is not an insult to human nature or science either. Ths film goes along those lines, where Mary has some pains, not particularly intense, and then there's a hint of ecstasy as she looks up to the light shining down from the star. Very plausible and very reverently rendered, I thought.
If we want to evangelize the culture, I believe we must not descend upon it like a SWAT team to pounce on every potential deviation from Catholic dogma, and rather approach it critically, appreciating anything that can contribute to our understanding of these mysteries (we have no direct reports about what Mary's experience of childbirth was like), and graciously pointing out anything that is ambivalent with regards to our faith and anything that is inaccurate, explaining why we believe differently and pointing out how the sciences, theology, Church teaching, and art can work together to present as ever fresh the truths revealed to us by God for the salvation of humanity. Otherwise, the people we try to reach will only see us as the fanatics we would be and would dismiss us as irrelevant. We would not be honoring the Lord or serving his Gospel very well then.
----------------------------------------------------------------
My purpose in these posts is to help spread the contributions of a variety of Christian and other writers in a desire to share significant writings that in my estimation contribute to the common good and directly or indirectly give glory to God and extend the Lord's work of salvation to all of humanity. G.S.
----------------------------------------------------------------