Fatima, the Church, and the World – Standing Together Before God 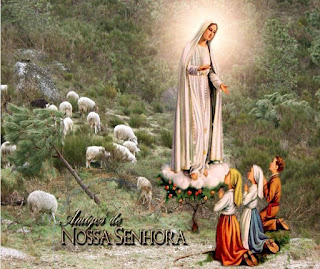 There is considerable material on the Internet by Catholics who consider themselves "traditional" on the state of our Roman Catholic Church and her relationship with Our Lady and her message to the Church and world at Fatima in 1917. Some regret the hierarchy no longer declares fit for hell all those who are in mortal sin or are not Catholic. They repudiate the pastoral or maternal approach of popes since 1960 as perverse and erroneous and condemn all efforts at ecumenism and evangelization through dialogue as sacrilegious and heretical.

They criticize so severely as to judge Pope Francis wrong in his friendliness to other Christians, Jews, Muslims, people of other religions, atheists, or people whom they could label in any way as engaging in sin or a sinful way of life or of thinking or speaking. In short, only strictly faithful Roman Catholics employing the Tridentine Mass who adhere to and continue to express the hierarchical condemnations of all errors as in the previous two millennia are among the "pure" or are truly faithful.


This is precisely how the religious leaders of his day treated Jesus and He warned that this is how they would treat his faithful disciples in every generation until his return. In his day the religious leaders accused Jesus of being impure and associating with sinners. Those who criticize and judge Pope Francis would do well to heed Jesus' word to the Apostles reported by Luke in 9:54 and unite not divide the Church. Those who preach the Good News in Jesus' Name are "with us not against us."

He also commissioned us to follow his example, work together, and bring his light to the world. Our safety is to walk humbly with the Lord and strive to obey the Father's will as Jesus did. This is why He gave the keys to Peter and for us in our day Peter is Pope Francis; so that we might have in Peter, in Pope Francis, an opportunity to practice our obedience to God. This has always been one of the attractions for men and women to join a religious order; so that in the person of their religious superior they would have a daily opportunity to put their own will second in order to make room for the will of God.


Some conditions in the Roman Catholic Church and the world are indeed troubling. Since the time of Jesus in every time and place the darkness tried and continues to try to divide the Church and to extinguish the light of the Gospel lit by Jesus the Son of God, which He himself cautioned his disciples about while reassuring them He would remain with them and us till the end of time. In particular more recently Pope Leo XIII was shown by God that an intense and brutal trial of the Church and the world would be caused by the devil in the 20th century, in response to which he composed a prayer to St Michael the Archangel and added it as part of the concluding rites of the Holy Mass. Although the Prayer to St Michael is no longer a part of the concluding rites of the Holy Mass, we can all continue to pray this prayer frequently and call upon this powerful messenger of the Lord to protect us from the threats and traps of the evil one.


The chaos, perverse liturgies, sacrileges, destruction of sanctuaries and other abuses that took place since the Second Vatican Council are not simply due to or explainable by the liturgical reform. Such evil comes from hell as it always has, and highlights the value of Our Lady's message at Fatima. Only God can dissolve atheistic regimes and the secular influence of Masonic and other humanistic principles. The gates of hell will not prevail against his Church, as Jesus proclaimed to his Apostles when He entrusted his authority to them in the person of Peter.

Jesus' words do not suggest a passive stance on our part as his disciples. He did not say that the gates of the Church would withstand the assaults of hell, but rather that the gates of hell would not prevail against the assaults of his disciples, his Church. Jesus commissions us in his Church to employ the weapons provided by Jesus Himself and through his Mother Mary in taking an offensive stance against the ruses and attacks that are inspired from hell, both in our personal lives and around us, in the Church and in society. Portugal was in the grip of an atheistic regime that followed Masonic principles and Our Lady brought God's solution to all such errors in her message to the world. The faith response of the faithful in Portugal allowed God to eclipse the Masonic government. It remained for the Church to consecrate Russia and for all of the faithful of the Church worldwide to put into practice the full message of Fatima so God could eclipse its influence in the world as well. Pope John Paul II did so March 25, 1984.

Liturgical abuses have been particularly grotesque in the English world aided and abetted by the poor translation of the Roman Missal of the Novus Ordo Mass in 1974, being as it was not a traditional translation but one that was made in a process of "dynamic equivalence", significantly impoverishing the Holy Mass texts as a result. The new complete Roman Missal is a worthy and reverent translation with a richer "diet" of the Word of God spread over a three year Sunday cycle and two year weekday cycle and additional readings for sacraments and other liturgies. On July 7, 2007 Pope Benedict published "Summorum Pontificum" in motu proprio restoring to our altars the Roman Missal from prior to the 1970 reform. Both traditions now belong to all Catholics. Pope John Paul II and Benedict XVI after the Great Jubilee of the Year 2000 called on the whole Church to reverse the liturgical abuses committed in the previous decades. We are all called to continue doing this by studying and being faithful to the Liturgy and by dropping unnecessary additions or modifications.


Abuse of holy things, disintegration of marriage and family, loss of vocations, moral collapse and rejection of God in society all still affect people in our time. As it was in Portugal in 1917 now some American RC's sense their nation has been ruled since the American Revolution of 1775 by people who follow secular Masonic principles and that these principles have also affected all of the western societies and churches. In light of the enemy's attacks on humanity we must beware as Jesus warned lest we sacrifice mercy to the letter of the law like the Pharisees did. Fear and the refusal to trust in God are consequences of the original sin and it is out of fear that we are all tempted to employ force to defend ourselves and what we value, to employ the letter of the law as a weapon, a power; rather than entrust ourselves and others to the power of God's love and mercy, justice and goodness. The Evangelist John in his first letter taught that love of God and neighbour casts out all fear.


Having reviewed testimony on various points of view I find it compelling to accept Sr Lucia's reply that Pope John Paul II's Act of Entrustment of March 25, 1984 satisfied Our Lady's request. Heaven is doing its part and so must we do ours. Much remains to be done. Our Lady calls us to live and to bring the message of Fatima to the world: to repent from sin, turn to the Lord, devoutly live the faith and the sacraments, pray and meditate on the Mysteries of the Most Holy Rosary, observe the Five First Saturdays, fast and do penance, wear the brown Scapular, and spread her message along with the Good News. Let us stand united in faith, hope, and fraternal mutual love before the world in faithful response to Jesus' prayer in John 17; that the world may believe because of the love we have for one another.
----------------------------------------------------------------
My purpose in these posts is to help spread the contributions of a variety of Christian and other writers in a desire to share significant writings that in my estimation contribute to the common good and directly or indirectly give glory to God and extend the Lord's work of salvation to all of humanity. G.S.
----------------------------------------------------------------