Where Love Is, God Is. On the 1st World Day of the Poor a poor man became a blessing to all who met him in the church. 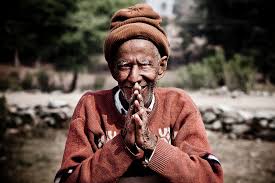 It happened at the Late Sunday Mass on the first World Day of the Poor, November 19th, 2017. Two weeks later, a Deacon wrote this note which in turn received the reply which follows from the Priest.

Note from the Deacon:

Reverend Father,
Two Sundays ago a crippled man entered after the last chance Mass had begun. He attracted my attention because of his demeanour.

He stood throughout most of the Mass. During the reception of Holy Communion I do not think he received. When I returned to my place he stood a little ways off from me. However, now he was in front of my line of sight and was facing toward me.

At the end of Mass, he stood with one hand on the horn of the bench where I was kneeling down following your blessing. I stood as usual as you processed to the confessional. I greeted you with my usual salutation, Praise be to God.

You passed this man as you briefly spoke with someone you appeared to know. The crippled man continued standing there awkwardly, and I resolved to bless him seven times (within my heart). Upon opening my eyes, I reached out and touched him with one finger on the hand, which continued resting on the horn of the bench in front of the kneeler.

I looked into his countenance and slowly he raised his head and faced toward me. Then, I held my gaze with his for what seemed like a very long time. I felt it was a great blessing for me.

I do not remember getting up and passing by him to bow before the Lord before taking my leave of the Church. However, on the return trip home I remained in a state of sustained joy. Several days later, it was brought to my attention that Sunday was the First World Day of the Poor.

An afterthought was that this man did not seek or gesture for money or help. He was just there. And it never entered my mind to offer him money. It was simply an encounter in the Lord's temple. A profound one at that.

Do you remember seeing the man I have described? Has he ever presented himself before (I do not recall ever seeing him there)?

Response from the Priest:

I believe that was the same night when after hearing confessions I went to chat with a few people who had waited for me. The poor man asked where he might use a phone to call for a cab. I brought him over to folks waiting for me because I just knew they would be willing to give him a lift, since they were going in his direction.

While we were talking about it a young woman came up and, having overheard, said that she was going very near to where he lived and would be delighted to give him a lift.


So that is how it ended. Divine Providence arranged for that poor man to be a blessing to many.