This week has been a real eye-opener, no mistake, for me as I participate in the 84th Annual National Convention of the Catholic Women's League of Canada in London, Ontario. Oh, I've known about the League for decades, but I realize now that I didn't really know the League. The realization kind of sneaked up on me, as I arrived and observed an ever wider range of women with different appearance, personality, education, competence, experience, age, and so on.
I came on the train with a group of women from the Montreal Archdiocesan Council and other neighboring dioceses, and on arrival we were met by a not quite middle-aged woman with the appearance of a body builder. I discretely asked her, after a few minutes of chatting, whether she might be a farmer or athelete. She gladly admitted to being a farmer now, and had been an athlete in her youth. Well, that was just the beginning.
At a meeting of Spiritual Advisors, mostly priests and a few bishops and religious women, we discovered that the legislative resolutions that the League puts together, votes on at these conventions, and presents to the various levels of government in Canada, tend to be the kind of ground breaking stuff that finds its way into federal and provincial legislation and services as far as ten or more years later.
It seems that the League is leading the way, by carefully researching issues that are raised by women who deal with those issues directly. The input of intelligent, resourceful, and deeply committed and involved women across Canada turns out to be a resource that even Cabinel ministers ignore at their own political peril!
What an amazing service that these women render to their sisters and to all of us in this land! I never realized that it was possible in Canada for ordinary people, and women, to have such a strong voice and position from which to lobby our political process. Some words I spontaneously said to the Montreal Archdiocesan Council a few months ago are turning out to be truer than even I had dreamed: the CWL is perhaps one of our Canadian Church's best kept secrets. Well it's time we get the secret out!
----------------------------------------------------------------
My purpose in these posts is to help spread the contributions of a variety of Christian and other writers in a desire to share significant writings that in my estimation contribute to the common good and directly or indirectly give glory to God and extend the Lord's work of salvation to all of humanity. G.S.
----------------------------------------------------------------

Email ThisBlogThis!Share to TwitterShare to FacebookShare to Pinterest
Libellés : men & women in the Church
Montreal, Quebec, Canada London, ON, Canada

Mr Bush: we treated all native people like the renegades who attacked us and almost wiped them all out. Then, Viet-Nam, Iraq... who's next? 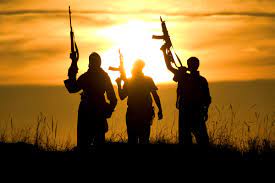 Once again this week, I caught a glimpse of President Bush addressing his nation, and anyone else who would listen in, assuring them of his resolve to continue fighting against terrorism. Suddenly, there was a click inside me, and I caught sight of an eerie parallel between this resolve today to rally against these perceived threats coming from Islamic countries and the resolve of American colonists to resist the "red terror" of the American Aboriginal peoples. If I had the opportunity, I'd suggest to President Bush that he might draw great benefit from considering the real possibility he might be pushing his great nation today into the same narrow and ignorant path taken by his predecessors some 2 or more centuries ago when, from an instinct of self-preservation, they misread the culture and civilization of the native peoples - wrote them off as "savages" - and proceeded towards their systematic extinction.
Today, our more enlightened scientific community has revealed to us that these peoples not only lived but even prospered here for millennia, understanding in great detail the workings of their environment, and living in such a way as to do the least possible damage to it. They succeeded so well that archeologists find relatively few traces of their passage here over time. Even from a cultural point of view, North American Aboriginal Peoples developed intriguingly successful societies, wherein there was relatively little poverty, and a highly developed moral and ethical code of conduct.
We came to understand the Native Peoples very late, almost too late, in fact we were too late for some tribes that are all but extinct. Our ignorance continued as long as we had any reason to fear them, denying our complicity in driving them away from their ancestral lands and literally robbing them of sustenance and of life itself. We came and took everything away from them, deluding ourselves that we were doing it for their own good.
Then, when they tried to defend themselves, we said, "You see, these are violent and dangerous people." and thought ourselves justified in speeding up our "ethnic cleansing" solution. Mr. President, are we not today making the same mistake of misunderstanding the civilization and culture of Islam?
How many times now have we heard people who know the Islamic nations say that these peoples are experiencing - as entire peoples - desperation at the invasion of our western culture and values into their societies? They experience our socially institutionalized greed and unfettered freedom from moral norms and modesty as depraved, as an intrusion and even as an invasion, which they sense as a great violation. Our way of living violates them, and they don't know how to protect themselves from us.
It is, at least in part, this desperation that is driving otherwise perfectly rational, intelligent, and educated people of all ages to become suicide bombers. Granted, this is not the kind of solution we ourselves - if we were in their shoes - might come to, but simply because we don't fathom such a strategy does not of itself make it insane. Cultural norms are relatively fluid, and people are sane and normal when they situate themselves squarely within the parameters of their own culture and society.
I certainly don't condone these violent strategies, but in this reflection, I am simply begging the question: Would it not be both possible and desirable for us to try to better understand Islamic society and culture, and the various ethnic peoples who live and believe Islam, and to enhance our lines of communication with them with the deliberate and openly stated intention of seeking mutual understanding?
Rallying behind the battlecry of zero tolerance for terrorism may be having the unfortunate side effect of treating entire societies as terrorists simply because we don't understand them, much as we did with the "Red Indians" 2 or 3 centuries ago, only this time, instead of us almost wiping out the native peoples of this land, we might find ourselves stirring up a quarter of humanity against us by pushing Islam as a whole over the edge and driving them to unite in self-defense against our intrusive globalizing, amoral culture and our irrational and monolithic understanding and policies with regards to Islam and Islamic nations.
----------------------------------------------------------------
My purpose in these posts is to help spread the contributions of a variety of Christian and other writers in a desire to share significant writings that in my estimation contribute to the common good and directly or indirectly give glory to God and extend the Lord's work of salvation to all of humanity. G.S.
----------------------------------------------------------------