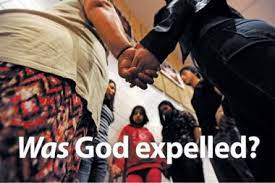 In recent decades we in Canada have heard echoes from our American neighbors of controversies over issues of faith. Prayer, the Bible, and even simple mention of or reference to God have all become prohibited in American public institutions, especially in schools and even colleges and universities. Anyone can be accused and criminalized for daring to include their thoughts, beliefs, or experience of faith or God in their free exercise of public life. Some of the most vehement defenders of the public virtue of tolerance turn out to be people who are most intolerant of anything having to do with God or Jesus Christ or Christianity or Judaism or the Torah or....


Christians and Jews have come under fire before, such as during the industrial revolution when some of them argued in favor of just labor laws and safe labor practices in defense of laborers who were ostensibly being exploited by capitalist interests, that is, by business people and owners. It is primarily due to their efforts, struggles, and sacrifices, even of their lives, that the work week went from six days a week of twelve hours to five days a week of seven hours, to give only one example.

Any number of adherents and promoters of various interest or lobby groups - whether for gay rights or for the right of unlimited free access to abort unborn babies or any number of other life and lifestyle claims - are not satisfied, as Christians and other citizens might be, with their liberty to do as they wish or believe. What they now manifestly insist upon is the unfettered approval of all segments of society for their life choices, on the one hand, and on the other hand, they militate for the condemnation and suppression of all disagreement or dissent from their own convictions and subsequently they militate for the suppression of all dissenters. What we now have is an inverse form of tolerance, that is, grandiose claims of open social tolerance for every point of view except Christianity, to name only one faith tradition.


The irony is that whereas one of the chief principles and policies of the now defunct U.S.S.R. had been precisely the suppression of all religion in general and of Christianity in particular; this public policy is now increasingly being embraced and implemented by the United States of America. The U.S.S.R., like other ideological movements and states, fell upon the suppression of the Christian faith in particular because they saw it as the greatest enemy to their policies and the greatest influence that would empower citizens to resist their rule, however unjust.

It seems to me, as a casual Canadian observer, that America has lost its way and the citizens seem to be in a process of surrendering their rights to those most able to manipulate the public institutions by means of wealth, influence, and any or all means necessary or useful in their drive to remake the country into their own image. Going... going... is the free republic dreamed of and enacted by the "Founding Fathers"... it is giving way to new forms of repression.

However, I am not a pessimist, nor am I an optimist, nor even perhaps a realist. I have met many wonderful Americans who are also frustrated to find themselves being manipulated by those with ready access to the "levers of power" and they have no intention of giving up their freedom or their hope. Believers are also confident in the victory of God in human affairs, not only his ultimate victory at the end of time but more importantly his victory now in the lives of those willing to believe and put their trust in Him.

There is undeniable power in the very notion of God, in the very name of Jesus Christ, in the principles of the Torah such as expressed in the Ten Commandments. Those most opposed to the deity or faith or religion turn out to be those who would brook no resistance or challenge to their own thirst for unlimited power to impose their own will or ideas upon society.

It could be said that those who broker in power over others are perhaps the most to be pitied. I pray and invite any and all believers to join me in prayer that they may be freed of such constraints on their understanding and appreciation for the value of life and of each human life. May the Spirit of the living God come upon them and by revealing itself to them show them that our Creator does not desire to take anything away from us in his moral expectations of us but rather is offering to give us everything.