CAUTION: There is an email message being circulated with the following headline (in red): 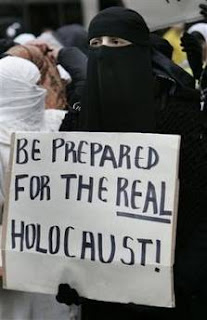 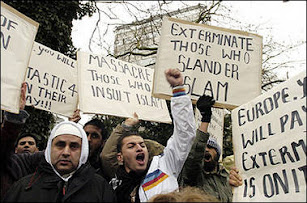 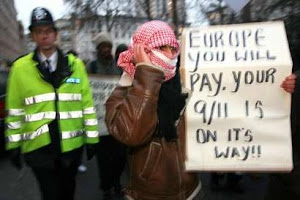 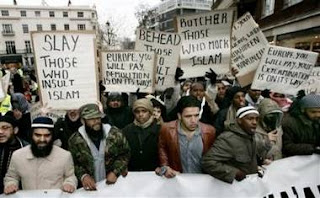 These pictures are of Muslims marching through the STREETS OF LONDON during their recent “Religion of Peace Demonstration.” Makes you wonder doesn't it....
This author admits Islamic extreme zeal happens.... the signs seem to show that some would exterminate all who oppose or resist Islam... but before you panic, do a little research.... A Christian response

In the email messages being circulated there follow variations of comments as in the red print above, but no impartial analysis of the photos....

I grant that one cannot imagine having a Christian demonstration against Islam in downtown or anywhere in the – first of all because Christians tend not to show such religious intolerance, but even if nominal Christians do, they tend not to do it in the name of Christ or of the Christian faith. Christian churches have leaders that regulate and attempt to discipline the behaviour of their members. That does not seem to happen, at least that we can observe, in the Muslim world.

Second, we cannot imagine such a demonstration in a Muslim country because the demonstrators would soon be put to death by the local crowd, as occasionally happened in Christian countries of the Middle Ages, in a feudal society, where behavior was on extreme occasions controlled by the crowd when they felt some behaviour was intolerable.

The Muslims in the photos seem to avail themselves of the freedom of western society to trample on that very freedom and threaten, even promise, the wholesale extermination of westerners and their society. Where it exists in truth, such hatred gives one a glimpse of hell.

In actual fact, the photos were of a different demonstration, and the local authorities made some arrests.... Check it out at the links below....

BBC News coverage…. Go to http://news.bbc.co.uk/2/hi/uk_news/england/london/4700482.stm Put it in perspective….  Analysis…. and conclusion: Don’t be so quick to pass on frantic, paranoid email messages… Take the time to research and analyze it first; lest you be manipulated for whatever reason by whomever! https://en.wikipedia.org/wiki/Jyllands-Posten_Muhammad_cartoons_controversy

A Christian Response and Reflection

We are Christians. We have come to know, believe in, and love Jesus as the Christ, the Chosen One of God, the One and only Saviour of the world, of humanity, the only-begotten Son of God and Lord of all, Risen from the grave and firstborn of the dead, who at the end of time will stand in judgement of the nations.

Many who espouse Islam – submission to Allah – and claim to be fervent adherents to Islam and practitioners of the Muslim faith in the name of that faith seek a harmony of mind and heart with other human beings and peoples who try to live spiritual and just lives and adhere to the one God and Creator of all by way of the Jewish or Christian faith, the other great world religions, or other spiritual paths. These Muslims truly do as the Qur’an says and honor the “people of the book” and it is possible to dialogue and live in peace with them. These are a more peaceful kind of people, who do not seek headlines nor attempt to impose their will on others or society.

Then there are other Muslims who claim to practice unquestioned following of the Prophet Muhammad and literal observance of the Qur’an who seek to impose Islam on everyone and on the whole world. They claim to have and practice zeal for God as Allah and in the name of his prophet Muhammad, and manifest such hatred and murderous intent and conviction towards all who are perceived by them as resisting or denigrating Islam, even simply by virtue of believing in the God of Israel or in Jesus as Lord and God. In the face of such hatred and homicidal zeal, what are we Christians to do?

It was like this from the time of Nero until , and it was like that in , , , and so many other places when the Gospel was first preached and there were early conversions to Jesus.... It is the blood of martyrs that fertilized the Church in every place.... men, women, youth, and even children who received from God the grace of enthusiasm for Jesus and the Gospel at the exact moment that they needed power from God to face their persecutors and give a vibrant, awe-inspiring testimony to Christ.

Our time may come, but if it does, then it will be allowed by God and an opportunity of grace to give our own testimony to Jesus and his Gospel, and put our trust in the Father as Jesus did himself, as He showed his apostles in the Gospel quoted today, September 20th, 2009. As Fr. Michael said in his homily today, for Jesus glory and the Cross are inseparable; more than that, it is from the Cross that glory comes for God, that God's love for us is made fully manifest: God loves his human creatures even when they spit on Him, despise Him, torture Him and put Him to death.

Our Trinitarian God knows very intimately each Muslim who is so erroneously zealous to massacre every human being who in any way resists Islam or criticizes anything about Islam, and He alone knows his own will and plan for them and for us. As Jesus said, God allows the darnel growing among the wheat to go on growing and producing its unwanted fruit until the end, when He will send his holy angels to separate the wheat from the darnel and bring it into his house, while the darnel will be thrown into the fire....

This worldwide situation has in our time a new face, but it has elements that have been there all along from the origins of these cultural and religious traditions, and they may very well be there until the end of time. These are not problems that are ours to solve, but merely to live through them with the best of our faith and ability, and trust in our God and Father and in his Son Jesus Christ.

“Were not our hearts burning within us as He talked to us on the road and explained the Scriptures to us?” Luke 24:32 «Notre cœur n’était-il pas tout brûlant au-dedans de nous, quant Il nous parlait en chemin, quand Il nous ouvrait les Écritures?» Luc 24 :32