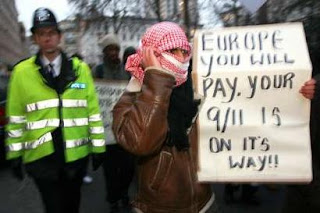 There are many people today wondering whether democracy will survive Islam. Check out this report made in June 2012 by CBN News (Christian Broadcasting Network) on the situation of democracy in Belgium. It begs the question why governments don't say or do anything to defend our democratic freedoms, the very freedoms radical Muslims employ to undermine western democracy in their conviction and dedication to win the entire planet Earth for Islam. Others ask why the Roman Catholic Church doesn't take a stronger position, especially Catholics from countries where the majority Muslim society persecutes them.

Muslims are right about one thing, that western society has become decadent, where people are free to resort to all manner of public indecency while at the same time eroding and taking away the freedom of religious belief, practice, and public manifestation of faith, and where even crucifixes are being removed because they are offensive to those who find Christian morality offensive.

The Crucifix depicts a man who is alone, abandoned, condemned, tortured, and dying, and yet whose dying words were "Father, forgive them, for they know not what they do." The selfless love depicted in Jesus on the Cross is indeed offensive to all those who want full freedom to exploit others, to behave without any regard for morality or respect for others, to trample the rights of others simply because one can, one has the power, influence, resources, and opportunity to do so, and let all those who cannot defend themselves be damned.

Why is God allowing Islam to spread into Western Civilization and undermine it from within? Perhaps it is as it was in the Old Testament or in the Jewish Scriptures when God allowed the Philistines to put Israel to the test because he had turned away from God. It was out of love that God put Israel to the test again and again. Perhaps in a similar way God has allowed Islam to grow and thrive and put the West to the test, to see whether we are willing to cling to our faith in God and obey his will even in the face of opposition, harassment, and persecution.

In the face of it all, can we find even a small part within us that is willing to accept and host the divine grace, the Presence of the divine Persons within us and bring us, like Jesus, to sincerely pray for our persecutors, to truly desire their good, and to ask God to "forgive them, for they know not what they do"? Only in this way can we give glory to God and increase his "reputation" in the world. Otherwise, we will continue to manifest the convictions, motives, and behaviors of Christians as totally depraved....

aborting our young, pursuing and defending unadulterated greed as the only foundation of our societies, continuing to exploit the peoples of the Earth and their nations for our advantage, profit, and "interests"... manipulating others to do our bidding, eliminating all those that oppose us, and basically taking the place of God as though we were gods ourselves, calling the shots and determining the destinies of others....

If we continue on this path, then we are all in for a very rude awakening.... Otherwise, we must do all we can to hold our leaders accountable.... The last time that democratic leaders showed moral courage and conviction was when it was evident that the majority or more of the citizens were themselves people of moral and religious conviction. Since then, we have all "lain down" and allowed only the "dissenters" to hog the microphone, to set the trends, and to intimidate us into submission, afraid to give witness to our own convictions and faith by threatening to brand us as enemies of democratic freedom should we show we believe anything that could be seen to oppose their own choices, convictions, or lifestyles.

We have all but become like the people of 1930's Germany who became afraid to "speak up" against what Hitler and his "brown shirts" were doing to Jews, the handicapped, and all and any who were deemed to be misfits or inconvenient to the "new order".

For a critique of Islam in its contempt for Christianity and Judaism and why majority Muslim societies persecute Christians and Jews, see "Islam Exposed: the Crescent in Light of the Cross" by Catholic Christian evangelist Tim Staples.