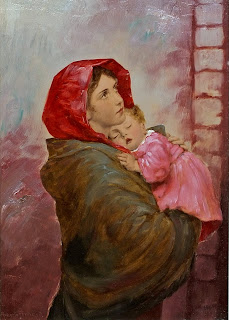 THE DOUBLE OUTRAGE OF RAPE ON YOUNG GIRLS

Much is being made in social networks and online advocacy and pressure groups about the pregnancy of a 12-year-old girl from Paraguay. I am so in sync with everyone over the great wrong of the sexual abuse of children. It is totally unacceptable in all places and at all times that anyone should forcibly impose sexual relations on a unwilling partner, most especially on minors and other vulnerable people. Rape in itself is an outrage, but the rape of a young child is a double outrage.

FAILURE OF HUMANITY, OF HUMAN DEVELOPMENT

Those who do such things demonstrate a profound deficiency in their humanity. They are so absorbed in themselves that no others, not even  vulnerable children, are persons to them... they are unable or unwilling to respect children as persons, to treat them with the most basic of respect as independent persons. Such people are very dangerous and are a menace not only to the vulnerable but to families and society as a whole.

WE MUST CARE, ALL OF US TOGETHER

Young girls who are discovered to be pregnant require the most competent and sensitive of care. I am all in favor of doing all we can to support such girls and their families and communities. It was bad enough that they were in all likelihood traumatized by the experience of forcible sexual relations without their consent or even understanding of what was being done to them. It is imperative that we not add to their trauma by forcing upon them another traumatic experience, which abortion most certainly is, witness the countless women who have come forward in recent decades to relate the long term painful consequences of their abortions. When mature women experience abortion as a trauma, can you imagine how a young girl would experience it?

Regarding pregnancy at a young age, we must be careful of the cultural biases we all carry within us, myself included. We in the West consider women under eighteen too young to get pregnant. However, in different societies and different times, it was and still is considered normal for women to marry and bear children not so very long after puberty. Christians have no trouble accepting that Mary of Nazareth conceived Jesus at or around the age of fourteen. In Québec and many other nations until not so long ago young women could marry without special permission if they were fourteen or older.

It is well known today that our commonplace "teenage" phase of life did not exist before World War II. It was the sudden affluence and leisure after the war that introduced "teen age" in our Western society. Before then, it was not unusual for children after puberty to be seen as adults and to leave go out to work and even leave home. My own parents entered the workforce at 13 and 14 years old, and my paternal grandfather started his working life at only ten.


All people of good will acknowledge and agree that rape is an outrage. Regarding abortion there is not such a universal consensus. I thoroughly agree that stern action must be taken regarding rape under any circumstances, but I cannot be in sync with those who propose abortion as a solution to an unwanted or unexpected pregnancy, not even in the case of rape. I know, that sounds shocking to me too. Part of me freaks out at reading these words, let alone writing them; so I understand if they freak you out, but please bear with me for a moment and hear or read me out.

The child growing in the womb, even of that 12 year old girl, knows nothing of her being forcibly raped nor of our categories or ideologies or anxieties or inconveniences. No matter what might motivate us, to abort that unborn child would be a great wrong. That child is alive and deserves to live, and none of us have the right to snuff out that life. That is why abortion is a great wrong. One great wrong can never be considered a viable solution to another great wrong.

A WRONG CANNOT BE MADE RIGHT BY ANOTHER WRONG

Aborting the child produced by a rape can never resolve the rape. The rape has already taken place and nothing can make it go away. Adding another great wrong will not make it any better but will only compound the consequences, making them even heavier. Imposing abortion on that girl or convincing her that abortion would be better for her would be to mislead her. Taking the life of the most vulnerable among us, the unborn being even more vulnerable than young girls, can never be a solution to any of our uncomfortable life situations, not even unexpected or unexpected pregnancy. To take the life of another, no matter the circumstances, carries consequences that are dire and permanent not only for the one killed but also for the one who snuffs out that life.

HUMAN LIFE IS OF INESTIMABLE VALUE

The unborn child carried by that 12-year-old girl who was raped by her stepfather is nevertheless a human life with as much right to existence as you or me, and this right to life is the most fundamental of human rights. If we are unwilling to honor this right, then all our other rights collapse like a house of cards. The fact that we are alive at all to experience the difficulties we have in life is itself a great good, an inestimable value. Despite all our difficulties, life is eminently worth living.

HOW ABORTIVE WOMEN EXPERIENCED THEIR NATURE AS WOMAN

This is without even saying anything about the harm that abortion does to the women or girls who undergo this procedure. When advocates of abortion first proposed it as a viable choice for women and girls decades ago, we didn't know then what we know now after so many women have come forward with their testimonies of dire repercussions they suffered following their elective abortions. I understand that those who are committed to the right of women to choose have great difficulty admitting the harmful effects and long term consequences of abortion, but denial doesn't make the truth evaporate nor the facts go away. Women who have suffered after their abortion tell us that the abortion violated them in all that is most fundamental to their identity as women, even though they freely chose the abortion themselves.

They realized too late that as a woman they have been designed to give life. Their whole body is geared to nurturing and giving life, and when they interrupt a pregnancy - no matter the reasons or motivations - their whole body goes into suffering and grief over the interruption as a loss and over the decision they took and the action they have taken.

After one or more abortions, women tell us that they came to realize the truth that when their pregnancy was wanted, from the very first moment they realize they might be pregnant they relate to their fetus as a baby. It was only a fetus as long as they didn't know about its existence. In a completely different register of discourse, when their pregnancy was unwanted they were encouraged to think of the fetus as mere "product of conception". It was convenient for them, as they were convinced by others, to think of the fetus as though it were inanimate and impersonal. They were encouraged to think of it as a mere extension of their own body. As the saying goes, a woman enjoys exclusive freedom and authority over all decisions regarding her body.

The pain began for these post abortive women when the penny dropped, when they realized these two opposing experiences don't add up. They found here two outlooks that are completely divergent and contradictory while the biological reality and truth of the matter is only one. What is conceived by human beings can only be and therefore is a human person in the earliest stage of development, but an independent human individual all the same. Nothing further is added to it except for nourishment from the first moment of conception as the process of cell division and diversification attends to itself.

ZERO TOLERANCE FOR RAPE AND ABUSE OF CHILDREN

Let us stop here for now and reiterate that it is incumbent upon all of us to do all we can at every level of society to enforce "zero tolerance" policies and taboos to strike the "fear of punishment" into those people who are so deficient in their humanity that they represent a real danger of rape for our vulnerable children and women.

ALL WOMEN AND GIRLS DESERVE OUR COLLECTIVE CARE AND SUPPORT

We must also do all we can to support those women and even girls who find themselves with an unwanted or unexpected pregnancy. Pregnancy, birth, and child rearing are the responsibility and also the blessing of the whole human family, and we are all responsible to attend to the entire process. The burden of responsibility should never rest exclusively or even mostly on the shoulders of the pregnant woman or girl.