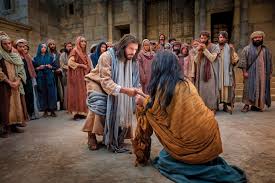 Thanks to some good Catholic Christian friends I've had occasion to reflect on and discuss these matters at some length over time. Time actually is itself a gift from God and in the time in between our exchanges, upon further reflection, by the grace of God it occurred to me that our "fencing" over such matters might get closer to the target by taking a more concrete approach. Let's examine different scenarios or venues in which to apply these principles, or to put it differently, two primary modes for dialogue over God's revealed truth and his will: first, the classroom mode, and secondly, the confidential mode.


In the "classroom" mode or approach

In a classroom, regardless of setting or age of the learners, the professor or teacher is expected to not beat around the bush presenting the material, in this case, God's revealed truth and subsequently the Church's teaching on it, and so to be very clear about the material and also to present specific cases to illustrate the principles. The clearer and more direct the presentation, the more likely the participants may have reactions, questions, comments, and hence a good discussion may follow. Along the way, the teachers apply their skills to observe and check out whether or not the material is being properly assimilated. Depending on the class's responses and reactions, it may take more or less time for the whole group to take it all in. It is the teacher's responsibility to map out over time the presentation and assimilation of the entire segment of the material and to prepare the class for testing and for practical exercises.


In the "confidential" mode or approach

In a confessional or in a priest's cabinet or office or when a person confidentially approaches a priest for personal advice and counsel, the classroom approach might risk being perceived as a "dumping" of a whole lot of theory and stifling the person's ability to express their concern. If he is not careful, a young inexperienced and zealous priest, or even an older one, can "cut the person off and stop them in their tracks" by being too categorical too quickly, and demonstrating zero patience to allow the person the time to take it in and wrestle with it. Wrestling with God is one of the classic images of how God is ready and eager to relate to souls, as with Jacob who became Israel because of the wrestling, and as Jesus treated with his apostles and disciples.

What priests must quickly learn in their ministry is that most of the time, if not all of the time, when people approach us more formally in one of these or in similar settings, they initially put out a "feeler", i.e. a formulation of their concern that is a little more general, or apparently more theoretical. Whether they realize it or not, they are testing us, to see whether or not they can trust us, whether or not they can be safe with us, whether or not we will pour balm on their hurt or simply intensify the hurt by wounding them some more. People often already apprehend the truth, to some degree, and merely need to have it confirmed or clarified.


In the arena of conscience

People, or souls, are often already being disturbed by their conscience, and are often afraid that they are unable to accept or to take the full impact and brunt or burden of the truth or of God's will. In addition they often, as we all do, suffer under imperfect images or understanding of who God is, and the more fearsome, the worse it is for them. When people don't have  fear of the Lord but only terror instead, they tend to manifest a conscience that is more scrupulous.

On the other hand, when people have a false view of God as loving and adopt a falsely "familiar" attitude towards God as "buddy" or as a God who is "permissive"; then they run the great and dangerous risk of presumption, of taking God for granted and avoiding his judgement or justice. The more they live and act out of fear / terror, or out of presumption / permissiveness, the less likely are they to ever truly understand morality or relate truly to God or know his love and mercy and finally respond with gratitude, praise, and a return of love that goes out to others.

Often, before we can say anything to them about the matter of their concern, it is more urgent to treat their misguided, mistaken, erroneous, or incomplete images or understanding of who God is and of what are his ways. Knowing the Lord's ways, or how God treats souls, makes possible the true "fear of the Lord" and is the beginning of wisdom. Jeremiah reported in 31:31-34 God's promise that the time would come, and it came with Jesus, when the Lord would make a new covenant with his people and they would all know Him, from the greatest to the least, and they would not need to be instructed because the Lord would instruct them himself.


After the example of the "Good Shepherd"

So, what proves better is for the priest to be receptive and just listen at first. After the soul's initial outpouring of concern, some priests may then "lay down the law" as it were, lest the person continue to "stray" and get more completely lost. However, what proves more effective is a similar skill as that put into practice by the teacher observing and measuring assimilation of the material, that is, it is for the priest to initially, before spelling out the truth, asking the person to say what they understand to be God's will in the matter, or how much they know of the Church's teaching about the revelation and will of God.

Then the priest can see whether or not the person knows the truth and is simply having a hard time accepting it or putting it into practice, or whether the person is stumbling around in the dark for not knowing God's revealed truth on the matter or the Church's teaching of it. The wise and experienced priest, like the counselor or therapist, then leads the person one step at a time, and while so doing, observes whether or not the person is able to take that step in and consider it. If not, then the reason or obstacle becomes the next point of focus, and so on. As in the classroom, with the individual, couple, family or other group, the priest will observe how much they are able to take the truth in and consider it, and it will become more apparent how long they have been struggling (often their whole life) and how much time the process may take.

We have to remember here that it is not our place to "force open" or "stretch by force" the opening of the consciences and wills. That is God's job and the Holy Trinity are at work on it 24/7. Our part is to discern how much we can do at any one sitting and invite the person to continue then with the next step, and so on. Secondly, we are to do all we can to help the person(s) anticipate to be tested in real time by the events of life and also by the Lord. Our role, like the role of every Christian to "walk with others in their faith journey", is to encourage souls and to learn the Lord's ways, to discover what the Lord is like, and to "Be a man and accept the Lord's discipline...." says 1 Kings 2

In a more casual setting such as before or after Mass or a coincidental encounter in public or other such "bumping into" each other, when a person puts an ethical or moral question to a priest, once again the priest must realize that just as in the more formal settings, people initially "test" us to see whether or not they can trust us not to hurt them, not to "rape" or "violence" them with the truth, wielding it like a club to subdue them or to impress it upon them and "control" their conscience, or contrarily, whether we will manifest respect for their conscience, i.e., whether we will respond in the knowledge that in the end it is for them to decide and to act in conscience before the Lord. God alone is competent to judge souls because He alone knows them better than we know ourselves.

People want to know that we will "release" them into the Lord's hands and allow them to conduct themselves upon the knowledge of the truth, just as parents do when they send their children out to go to school or to other activities out in the world. God trust us even to the point of allowing us to get it wrong, to makes mistakes, and to learn from them. In God's school we always have the option of learning the "easy" way and the "hard" way.


In conclusion, let us follow Jesus in his shepherd Pope Francis

In conclusion, then, I believe that a primary reason for the persisting confusion in public discourse over Pope Francis' "Post Synodal Apostolic Exhortation Amoris Laetitia" is that most participants in the public debate are functioning in the "classroom mode", whereas Pope Francis is appealing to both pastors and souls to leave the "classroom mode" to those other settings of learning, and instead, to pay closer attention to the "confidential mode".

Pope Francis gave the universal Church - with the conviction that Almighty God ardently desired it for his Church - the Jubilee Year of Mercy precisely due to the urgency of leading the Lord's flock away from "terror" of the Lord or excessive and false "familiarity" with the Lord and, instead, to real experience of the Lord and both just (and so confessing to Him) and merciful (and so approaching Him in his priests without fear).

Pope Francis from his very first days as Bishop of Rome has been continually, energetically, and confidently exhorting pastors to show mercy through hospitality of spirit, kindness, understanding, patience, generosity, and gentleness; while simultaneously exhorting souls to practice greater trust in the Lord and confidence in his mercy and in his presence and power at work in his priests, and to approach God through priests and other people exercising pastoral ministry without fear.