Why are some of our beautiful youth killing themselves or turning violent? We can do a lot! 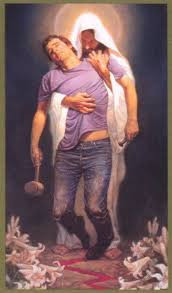 Then there are the others who turn violent. Again, why?


Being a RC priest offers a unique perspective

In my almost four decades of experience as a Roman Catholic priest, it is almost always the ones that are the most sensitive and intelligent that commit suicide. Oh there may be attenuating personal circumstances in their lives that brought them to such a state of desperation as to give up all hope for their own future or of ever emerging from their particular suffering and pain. However, we are all imperfect and all families, all parents, all children and siblings are imperfect, and it's an imperfect world. So why do most of us get over it and survive and some don't?


Consider for a moment this scenario.

Sensitive, bright young people look at their world, our world, and what do they see? They see that we are in trouble, we being humanity. They accumulate lots of raw data - and the level of technology into which the young today have been born is the most intense in all of human history - and it doesn't take long for the intelligent to begin drawing dire conclusions.

The extinction of species is progressing and a geometric rate with few signs of abating, despite the valiant efforts of some inspired individuals, groups, and agencies to protect certain species that are in danger of extinction.

For decades the weather patterns have produced ever intensifying storms in both hemispheres, often with catastrophic devastation causing the displacement of populations. Glaciers are disappearing and the great ice sheets of Antarctica and Greenland are melting at accelerating rates, and little is being done to stop it. Ocean levels are rising and no one knows how fast or how high it will go.

Meanwhile, transnational corporations - the principal wheels turning the world economy - the world's governments, which principally cater to these large interests, and the armies of scientists employed by them to defend their interests (profits for their principal shareholders, senior officers, and board members, but certainly not the common good), and the major public media - controlled by those same transnational corporate interests - all of them are living in total denial. All of these are obsessively dedicated to maintaining the current order at all costs.

Intelligent and sensitive young people look at their world and see humanity as a vast herd speeding towards a cliff - ever getting closer but still at an unknown distance - and when we get to the cliff, our denial will have us speed over the edge into oblivion.... So, why wait, why not make an end now?

Okay, so this scenario seems quite bleak, granted, but I do believe that our young people cannot avoid coming to such conclusions, given the staggering quantity of data to which they are exposed.


Ironically, young people have within themselves all they need in order to make a difference!

Let's face it. We all need hope in order for our life to begin to be bearable, but we want more than just to be able to endure life, we want to thrive! Actually, we were designed and built to thrive. That is the focus that generates so much of the energy which characterizes youth and makes them so attractive to each other and to all of us who are older and have lived longer. Their enthusiasm is infectious.

We need our youth and our children. They aren't the future; they are the present! They care deeply about life, about their world, and about humanity. The look to the future and we need to support them.


Consider our ancestors and the amazing things they accomplished

Our grandparents began working full time when they were 10 or 11 years old. My parents began working full time when they were 13 or 14. Full time for them wasn't a 40 hour week including 5 hours for lunches and 2 1/2 hours for morning and afternoon breaks. They often worked 60 hour weeks and sometimes 6 days a week. The young are capable of amazing efforts and outstanding contributions, but for one reason or another, our society has come to think of children and teenagers, and even young adults, as lazy, selfish, and uninterested in the common good. It's a lie!


Canaries in the mine shaft

I believe that our children and youth are like canaries in the mine shaft - they are the first to sense the danger which threatens us all. We need to pay close attention to the clarity with which our youth now perceive our world and the dangers which currently threaten our common home and very existence.


The future is in the present - young people are already changing the world!

You have only to browse the Internet to discover many amazing initiatives being taken be children and older youth to do something proactive about the issues currently challenging humanity.


We can't wait for the major media, for our governments, for corporations

The major media are not interested because they are, for the most part, controlled by the transnational interests that are fiercely dedicated to maximizing profits for their major shareholders, senior officers, and board members - representing less than 1% of the general population. The general drift of what is called "news" is to stoke the fire of fear in the general population in order to keep the current system going. Governments generally think they have no options but to cater to the large business and bank interests - see how it was our public funds that governments used to bail out the banks that basically became bankrupt in 2008 due to bad judgement and risky investments.

Individuals in government and in corporations may very well be good people, and they may very well want to change ways of doing things to make a better world, but they apparently all feel stuck in the way things are. If they try to do things differently, the population will panic and vote them out, or in the case of business, the board will fire them and replace them with someone more compliant.


We already have the power to think, to create, to do

A number of social and economic analysts calmly insist that the real power lies with the general population - but violent revolution is not the answer - as we saw in the 20th century. Communism simply replaced one bad group of tyrants with another. We do have power, but not to topple the government or to boycott companies and banks. Our power is to think, to create, and to do.

We need to join the ranks of creative children and young people - or at the very least to support them in their creative initiatives - and to create circles of enthusiasm and cooperation to generate new ways of doing things. The journalists who produced a book and video documentary "Demain - Tomorrow" went exploring the world and found amazing initiatives being taken to work for the common good and stop waiting to companies or governments to "save" us. Consider the major cities around the world that have created their own local currency to protect themselves from the high risk investments being made by worldwide banks.

There exist companies begun, owned, operated, managed, and developed entirely be the workers. Check out the Basque wonder called "Mondragon Corporation" which has grown non-stop since 1956 and is spreading to other countries around the world. The workers do the work but they also evaluate their directors and managers, make the decisions needed by their company, and when the work shrinks in one company, workers are offered jobs in a neighboring company. No one is fired unless they simply don't want to work, but people are motivated because they are also the owners. The highest paid member is not paid more than 5 to 6 times the lowest paid.

In the uncontrolled capitalism currently controlling our world, the spread is more like 300 times, because the bulk of the profits don't go to the workers but the less than1% of the population making up the major shareholders, senior officers, and members of the board. At worker owned companies, there are no such elites because the profits are not grabbed by a handful of people but shared by all.

In the Mondragon Corporation, their 80,000 worker members commit ten percent of profits to be invested in education of all their children and in their university which develops their future. Forty-five percent of profits are reinvested in the corporation to develop, do research, grow companies, implement new technology, and acquire new companies. The remaining forty-five percent of profits go to the common pension fund of all workers and, until they retire, the finds are reinvested in the corporation and its member companies. Everyone profits, not just a few, and their whole society is enriched by the presence and activity of their over 100 companies members of the Corporation.


Young people - You have a bright future, and we all need you!

We can no longer afford to wait for governments or companies to come and be our saviors. It was a simple parish priest with a handful of unemployed workers who started the first company in 1956 that became the Mondragon Corporation over the next six decades. We can identify needs and create our own solutions to provide for those needs and build for ourselves, our families, and our society a better future. We don't need permission to think, to explore, to create, to do, to cooperate, to develop, and to thrive. We have a mandate from the Creator of the universe who told us to "cultivate the garden" which we call Planet Earth. So, it's really up to us. Some really creative individuals can accomplish a lot by themselves, but even they need the support and cooperation of others. Together we can do a lot more than we may at times think or feel. Let's talk!
----------------------------------------------------------------
My purpose in these posts is to help spread the contributions of a variety of Christian and other writers in a desire to share significant writings that in my estimation contribute to the common good and directly or indirectly give glory to God and extend the Lord's work of salvation to all of humanity. G.S.
----------------------------------------------------------------